This is just an update on my personal (go and not go related) life!

My internship in Malaysia is nearing it's end. I have been here for a bit over 4 months now and have had a great time. I got welcomed in the go-community here and met some great people, which is awesome. In that regard, I am a bit sad that I'll be leaving soon. On the other hand there are quite a lot of great things happening soon.

My parents will come over to Malaysia in less than two weeks and we'll travel in Malaysia for two weeks, after which they will return to the Netherlands and I'll be going to Hong Kong for a week of sightseeing.
And, the most awesome next to seeing my parents, after that I am going to study at Blackie's International Baduk Acadamy aka BIBA in South Korea for a week! Which is totally super amazingly awesome, of course!

I'll be in South Korea for two weeks in total, the first week I'll study at BIBA full-time and the second week I will stay at BIBA, but mainly do sightseeing and maybe do some studying if I have time left. I have no idea what to expect, but I am sure it will be a great experience.
Of course, I will let you guys know how it went (but it's still more than a month from now).

And after that I am off to Adelaide, Australia for 5 months of study abroad! Which is also awesome because 1. Australia, 2. summer, 3. Australia, 4. back to studying, 5. I'll get to see kangaroos, 6. summer, and 7. Australia.
Did I mention I like summer? And Australia? Because I do. A lot. 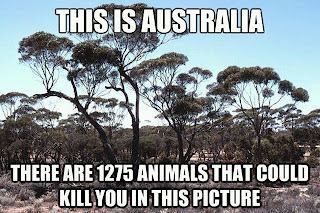 (Admittedly, I am little scared because, well, it's Australia..)

The only downside is that I don't know how much time I'll have for go. I only have to take 4 courses, but I have no clue how much workload those will be. Also, I had more time for go here because I didn't really have another social life, which was fine, but I'm not planning on doing the same in Adelaide. And as far as I can see online, there isn't much of a go-scene in Adelaide.

Don't worry though, I will still keep playing (even if it won't be that much) and updating this blog. I am determined about not dropping go again, and even if there is only a very small go-scene in Adelaide, I will still look it up.

Regardless, all of this is still far away, and we never know what the future will bring!
For now, I can't wait to see my parents again, to travel and (of course) to study go!
Posted by My-ke at 31.12.13

Welcome to
'The Go Challenge'!
I am just a Dutch student, who loves go and writes about it.